Some think an obvious consequence of dramatically lower fuel prices is lower airfares. But it’s not that simple. It may not even be likely.

“Lower fuel prices translate into lower operating costs for airlines, and, sometimes, air carriers pass along these savings to travelers in the form of lower air ticket prices,” according to an ARC/Expedia report published in December. “This correlation is neither universal nor consistent.” 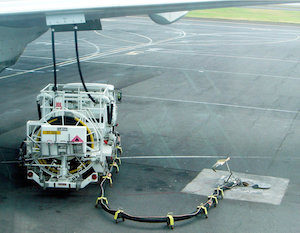 During Delta’s earnings conference call on Tuesday, executives suggested cutting fares is not top of mind. CEO Richard Anderson discussed “yield preservation” … “regardless of fuel prices.” He also said that Delta would use any windfall from falling oil prices first to pay down debt and then return more cash to shareholders.

The International Air Transport Association predicted global 2015 fares on average would drop more than 5 percent from 2014.

For now, at least in North America, fares do appear to be on the decline. According to ARC data, average December 2014 roundtrip fares dropped year over year for each travel agency type and advance-purchase period. ARC tracked particularly big declines for Boston-Chicago O’Hare (10 percent), O’Hare-Minneapolis (12 percent) and O’Hare-New York City (14 percent).

By another measure, the average December fare booked by corporate travel agencies dropped $15 to $472, the lowest for that month since 2010. That’s according to Prime Numbers Technology, an analytics firm owned by Atlas Travel & Technology Group. Based on more than 220,000 bookings, the company calculated that the average December 2014 published fare dropped to $708. It’s the lowest Prime Numbers measured for that month in eight years of publicly providing data.

New forecasts call for the trend to continue, reversing several earlier industry predictions for modest average fare hikes this year. Carlson Wagonlit Travel and the GBTA Foundation last summer predicted 2015 North American business travel fares would increase on average by 2.5 percent. GBTA in an October report raised that to 4 percent growth, but last week revised the forecast downward to a 0.9 percent decline for the year.

Meanwhile, many industry watchers wonder why carriers don’t cut fuel surcharges. That would lower overall air travel costs, if such cuts aren’t offset with higher base fares (a distinct possibility).

Some foreign airlines have reduced or eliminated fuel surcharges. U.S. carriers, which usually apply them to intercontinental but not domestic flights, have not. When asked in which markets Delta faces pressure to cut fuel surcharges, Anderson wouldn’t bite.

Rick Seaney of FareCompare in a Jan. 13 blog post wrote that fuel surcharges for flights this spring to Europe may ease a bit. “Pressure is building and politicos aren’t the only ones questioning the high add-ons,” he wrote. “Passengers are, too.”

Though it sounds counterintuitive, lower oil prices don’t always or immediately translate to lower airline fuel costs. Fuel hedging, for example, is risky business. It protects airlines from soaring fuel costs, but also can have the reverse effect if oil moves the wrong way. It depends on exactly how airlines set their hedge contracts.

Delta said it took a $1.2 billion charge in the December quarter “for mark-to-market adjustments on fuel hedges settling in future periods.” (Even so, at current fuel prices, Delta for 2015 expects $2 billion in fuel cost savings this year, net of its hedges).

Beyond fuel, there are other upward pressures on airfares. Some airlines are growing their operations, but continue to do so slowly. Capacity remains tight.

At the same time, there’s plenty of evidence that travel demand — and U.S. business travel demand in particular — starts 2015 with relative health. Part of that comes back to low oil prices, which can mean more discretionary spending for many consumers and businesses. “Steady demand,” according to Seaney, “means that airlines have little incentive to lower ticket prices.”

And they also have little incentive to back off from the fees they charge for optional services. Those are generally not taxable and not open to negotiation with corporate clients. Unlike the price of fuel, but similar to fuel surcharges levied by airlines, fees seem to go only way.